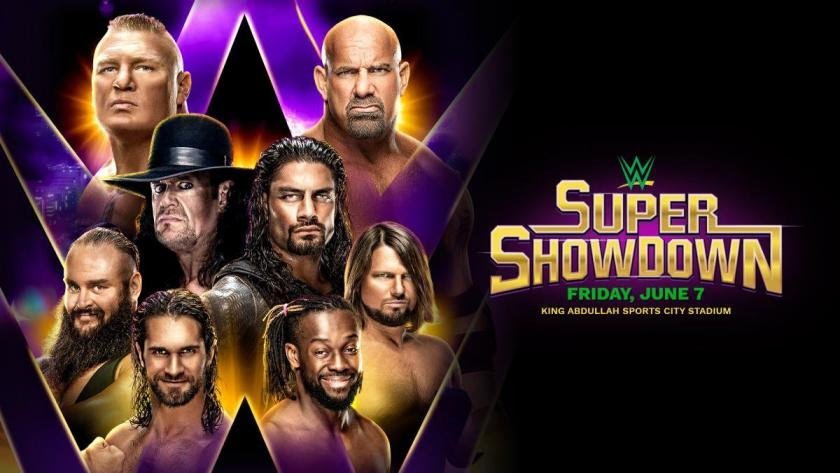 Credit: WWE Tomorrow WWE returns back to Jeddah, Saudi Arabia for what’s being proclaimed as “WrestleMania- Comparable show” WWE Super ShowDown. The massive event is being headlined with a “Blockbuster” Dream Match as ” The Icon” Bill Goldberg goes one-on-one against “The Deadman” The Undertaker, a match fifteen-years in the making!

Last Month’s WrestleMania 35 was a rollercoaster of a pay per view this year, right out of the gate the “Beast Incarnate” Brock Lesnar was dethroned by “The Beastslayer” Seth Rollins to capture the Universal Championship! We saw “The Planets’ Champion” Daniel Bryan gets toppled by the WWE Universe’s “Ultimate Underdog” Kofi Kingston for the WWE Championship! “Becky Two Belts” made “HISTORY” by becoming Both Raw and SmackDown Live Women’s Champion; after defeating Charlotte Flair and, giving “The Baddest Woman on the Planet” her first singles loss in WWE!

WWE Super ShowDown has a start time of 2 p.m ET with the special event scheduled between three and four hours, and the Kick-off show will begin one hour prior to the scintillating action! Let’s get the ball rolling and I will give you my predictions for the event.

The Uso’s vs. The Revival (Kickoff Show)

On this past Monday, this match was announced before both teams competed for a Six-man Tag-team match where Roman Reigns and The Uso’s (The Bloodline) clashed with Drew McIntyre and The Revival to kick off the show. Since this was a thrown together contest at the last minute; and given WWE’s track record of starting things off on a positive note, I’m going with The Uso’s on this one. Pick: The Uso’s

Can we even consider this be an actual match? “The Freak” Lars Sullivan has been on a path of destruction for over a month now, consecutively annihilating the trio despite their best efforts. I give this ass-kicking four minutes before Sullivan delivers the “Freak Accident” and covers all three men at the same time to secure the victory. Pick: Lars Sullivan

Both competitors are directionless on Monday Nights, so it makes logical sense for WWE to book two powerhouses for no apparent reason. Lashley is part of Shane McMahon’s (Corporation 2.0) and Strowman has nothing going for him at the moment. In order for The Monster Among Men to be protected outside interference must occur; so I predict some shenanigans to cost Strowman the match, to give Lashley something to gloat about next Monday. Pick: Bobby Lashley

Does anyone remember when Braun Strowman won The Greatest Royal Rumble in 2017 and received the Trophy? Yeah neither does WWE. Don’t get me wrong here I’m not implying this won’t be a stamp for a new superstars’ book; because Strowman and Lashley are both out of the equation, I’m going with The Scottish Psychopath to get a “Big” win here, and this should be the first step in him getting a crack at Rollins’ Universal Championship at SummerSlam. Pick: Drew McIntyre

Unfortunately, this “Best in the World” nonsense has only begun. Remember when the McMahon family delivered the “Blockbuster” announcement that the WWE Universe was now “The Authority”? Yet throughout the five- hours of weekly programming Shane is apart of at least two of those. Given 50/50 booking since Roman was taken down this past Monday on Raw, that assures that Shane is loosing here. Let’s just pray that this match will be reminiscent of Miz/Shane at Mania. Pick: Roman Reigns

These friends and foes have a storied history spanning over twenty years. Orton first made his impact in WWE under the protection of “Evolution” led by his mentor HHH. Orton and HHH have traded victories over the years over the coveted WWE Championship. If Orton had a meaningful match coming up I’d say him, but since HHH is coming off the heels of his big WrestleMania win over Batista, and a “Monumental” Takeover XXV weekend I’m going with the “Cerebral Assassin”. Pick: HHH

This the first time that “The Demon” has been utilized on the main roster, and the first time in Saudi Arabia. Both competitors have traded wins over the past few weeks; Andrade is destined for major things in the next year, but it’s not going to be today. There’s no way Balor is losing the championship here. Pick: Finn Balor

So the inside story is that Daniel Bryan and Kevin Owens refused to make the trip to the event. Rumors have it that Owens is in support of Sami Zayn’s (his real-life best friend) Syrian heritage. Dolph Ziggler appeared out of nowhere and viciously assaulted Kofi. Ziggler is bitter and jealous of his opponent’s success and feels underappreciated of his efforts. He was a last-minute replacement and Kofi’s championship-reign is just getting started, so the conclusion is academic. Pick: Kofi Kingston

With “The Beast in the Bank” looming, picking his time to strike, Rollins will have to be on super alert here. Corbin will give him a decent challenge, but Rollins will overcome his adversary. The biggest question is whether Brock Lesnar is actually cashing-in, or this has all been a masterplan to gain more viewership to improve ratings. If last year Strowman walked out with the red belt I would say there’s no way in hell WWE would give Lesnar another run with the Universal championship, however, you can’t count out Vince’s questionable decision-making. My hope is Rollins. Pick: Seth Rollins

The Undertaker vs. Goldberg

I for one am extremely excited about this dream match, The Titans of WCW and WWE finally clash tomorrow. Goldberg hasn’t been on WWE programming since the 2018 Hall of Fame Induction Ceremony, Undertaker made a “Shocking” return to WWE on the Post-Mania-Raw to shut up Elias. He was missing in action at this year’s WrestleMania, which is completely against his character. Given WWE’s history of having their own superstars topple over WCW’s fallen soldiers, I will go with Undertaker. Pick: The Undertaker

As The Undertaker is celebrating his hard-fought victory the lights flicker, “Crows” echo through the arena and “The Icon” Sting is behind Undertaker, the two have an intense stare-off to close the show!