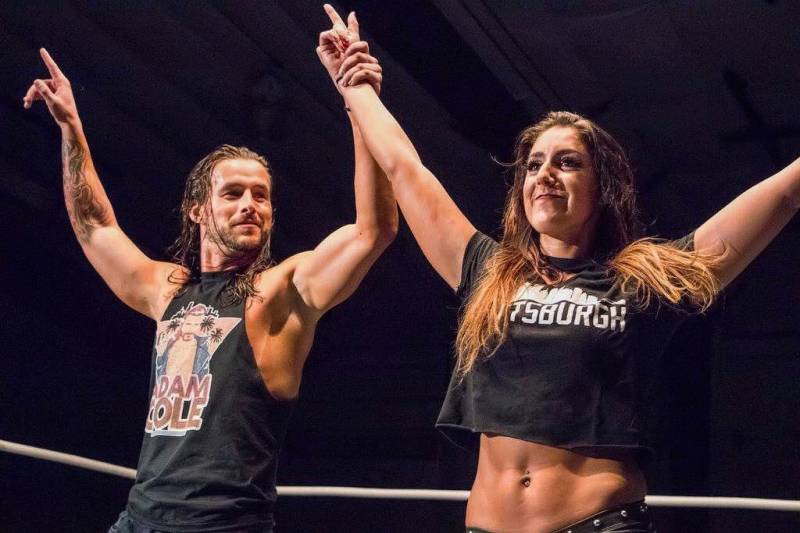 AEW Star Dr. Britt Baker has be shown on WWE NXT TV a few times in the past as she sometimes is in attendance to support her boyfriend Adam Cole.

Baker has full support from AEW Owner Tony Khan when it comes to attending the rival companies events, however the same can’t be said for Adam Cole when it comes to supporting his girlfriend Britt Baker by attending AEW events, at least at first.

Britt Baker was recently a guest on AEW’s Unrestricted Podcast and she discussed being able to attend and support each others events.

“We’re very lucky that Tony [Khan] has no problem with me going to watch his live shows. As we all know, I was in the crowd at TakeOver when he won the title for the first time. This is also annoying, but he was originally told that he can’t come to our shows. For All In, he had a plane ticket booked and they told him, ‘You can’t go.’ He still came to be supportive and he watched it on his phone in the hotel room and came to the afterparty. Recently, they changed their tune and he was able to come to our New Year’s show. It’s great for him too because this is his family. The Young Bucks and Adam Cole go way back. They’ve been together long before Adam Cole and Britt Baker were together.”

The friendship and relationship between Britt Baker and Tony Schiavone has been no secret and is often played up on AEW Television. Schiavone has even worked in Adam Cole references before during commentary. Schiavone mentioned this as well, stating:

“Excalibur told me that Adam is always concerned about his weight and thinks he looks fat. We were doing commentary about you and Excalibur says, ‘I think Dr. Baker likes you.’ And I said, ‘Why not? I understand she has a thing for fat guys.’ That was directed right at him. I didn’t know if he picked that up or not. I love doing stuff like that.”

Britt Baker then responded by saying that Cole did indeed catch the line, and loved it. She went on to say that it’s an ongoing joke between Excalibur and the PWG family. She also said that she hopes one day to be able to see Adam Cole in the ring with The Young Bucks, Kenny Omega, and Cody Rhodes.

“He did (catch the line). He loves it. It’s an ongoing joke they have. Excalibur, they’re from the PWG family. It’s all one huge, giant family. And I hope there is a day in the future when Adam Cole can be in the ring with The Young Bucks and Kenny and Cody and it’ll come full circle and we’ll be a giant happy family.”

The post WWE Originally Told Adam Cole He Was Not Allowed To Attend AEW Events To Support His Girlfriend Britt Baker appeared first on BodySlam.net.