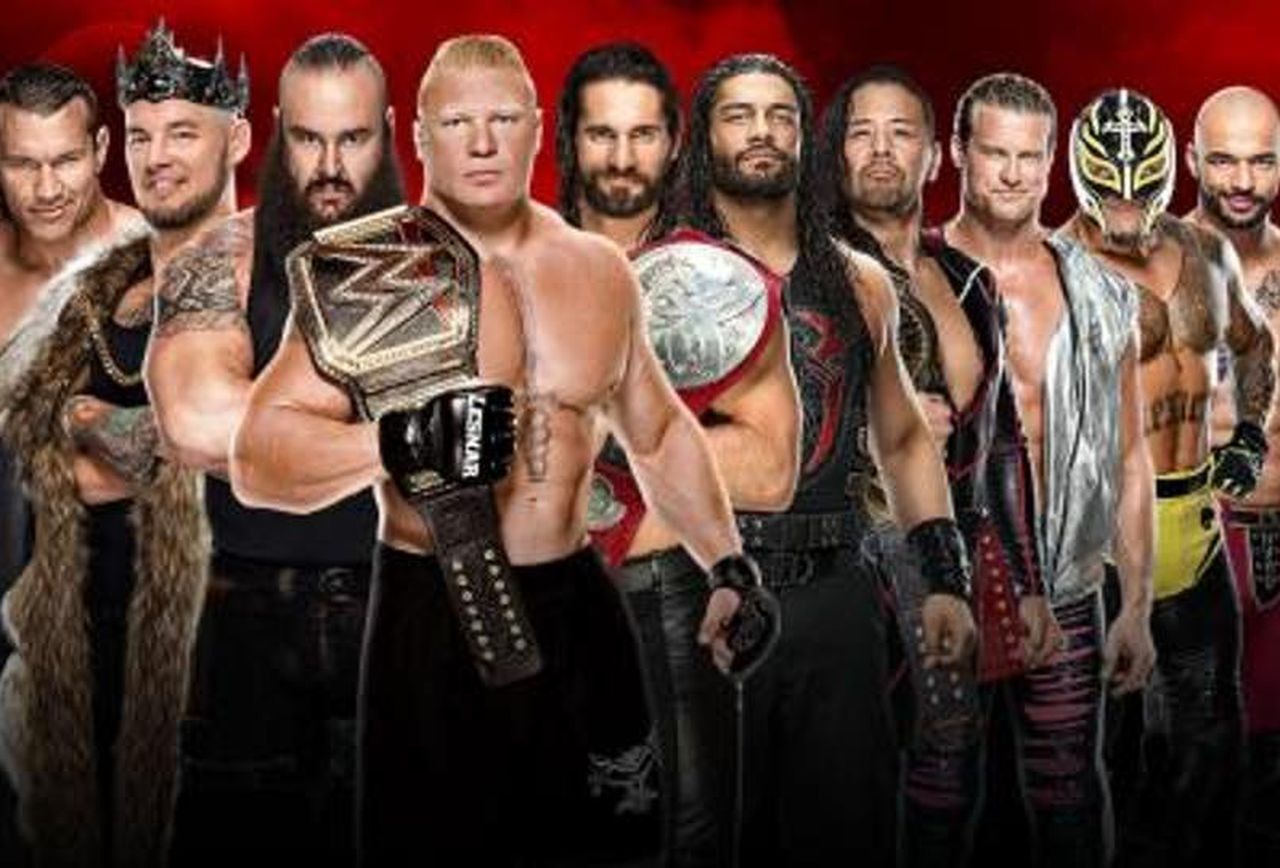 I felt the need to use a bigger platform than my twitter following to address this issue. Recently, a rag called DailyDDT reported that Brock Lesnar eliminated “53% men of color” from the royal rumble. I decided to do some research into this, and came up with, wait for it….a totally different set of numbers! So let’s take a moment and take a look at what ACTUALLY happened at the Royal Rumble.
Stop here if you don’t want spoilers…as if you haven’t seen them already!
Also please note this is an EDITORIAL, my views do not necesarily represent those of bodyslam.net that DailyDDT is a rag trying to play the race card and failing miserably.

So first to the ring we had Brock Lesnar, who we knew was going to tear through the roster. Most of us were sure, and praying, he didn’t win the thing. What would happen then? Could he challenge for the other title? To be honest I have no idea what belt he has at the moment because he’s never around to defend it, but anyways, moving on.

Brock in his time eliminated Thirteen people, pretty good for an out of shape dude, he’s still got it. Of those thirteen we had the following.

Elias came down first, singing a song for Lesnar, which he sadly did not appreciate. I personally was Walking With Elias, but Brock apparently thought another tune was in order. Brock eliminated him in one minute exact.

Next was Erick Rowan, who came down with whatever is in that cage of his, frankly I quit caring long ago. Maybe it’s Damien (Someone get this joke, please) Erick got in, and was eliminated in 8 seconds flat.

Next was Robert Roode, one of my personal favorite wrestlers. He lasted 41 whole seconds against the Beast Incarnate, finally being eliminated.

John Morrison came back in his first rumble in awhile. I was hoping he would put up more of a fight, but nope. 9 seconds!

Next up was Kofi Kingston. I was hoping for some fancy footwork by Kofi to rival what we saw in the womens rumble, but sadly the Beast basically toyed with him. I was glad he lasted the longest, however, at 5 minutes and 6 seconds, but was disapointed in no Kofi fancy footwork this year. Kofi goes in the C category for “Color”. Keep in mind I am using DailyDDT’s terminology here.

Next was Rey Mysterio. I’m not a Rey fan anymore, his shine wore off for me long ago, unfortunately. Rey lasted the second longest at 2 minutes 54 seconds. Honestly I was hoping Brock would launch him with one hand out of the ring to really show his dominance, but you could tell he was wearing out quick. Since the disease nearly killed him years ago, Brock has really gotten out of his peak shape. There’s no doubt the man is still a beast, just not as much as he was. Rey falls in the NC category putting the score at

Big E was 8th, and I was really looking forward to this. But Brock tossed him within 53 seconds.

Cesaro was number 9, and I figure if anyone could give Brock a beating, it would be him. But he lasted 18 seconds, disappointing.

Shelton Benjamin! This was a great angle, something else DailyDDT didn’t talk about. They talked about their old training grounds, how Brock and Shelton were old friends, etc etc. It was really interesting, I had no idea the former Gold Standard and the Beast were friends. I enjoyed this quick segment very much, it told a story, however brief. A whopping 37 seconds for the former Gold Standard, I hope we see him back though!

Next up was the intercontinental champion and one of the most underrated and misused guys int he company besides EC3, and my favorite from Japan, Shinsuke Nakamura. However, he only lasted 37 seconds against the Beast.

Next was the suprising, or not so suprising if you checked Twitter earlier that day, return of Montel Vontavious Porter. M. V. P. We even saw the Beast dance to his music! As Cassidy would say, “That’s whats up!” It was awkward as hell, but funny to see Brock dancing to MVP’s rather catchy theme song. Quick break while I put it on actually. NC7 C4
Keith Lee, the big man from NXT was next. Brock basked in his glory for the second longest (I stand corrected from earlier) at 3 minutes 32 seconds. Keith Lee was eventually eliminated, sadly, but I still Bask in His Glory.

Next was Braun Strowman. I thought “Surely Braun will eliminate Brock and beat the hell out of him!” Sadly nope. Braun was eliminated at 1 minute 48 seconds, giving more legitimacy to the “Beast”. NC8 C5

Did you guys even learn math in school? Or use Google? Or the many calculators available online? I mean I’m not even good at math. It took me 3 tries to get the numbers right on this, yet I came up with the correct results? Maybe you guys need to learn to count, watch some Sesame Street or Mr Rogers then go back to writing. 61.54% of the people eliminated by Brock were “Non Color”. “Colored” people were 38.46. A far cry from DailyDDT’s 53%

Give me a break. We’re all fans. Ethnicity should not matter. A wrestler is a wrestler. They all, mostly, do a fantastic job in the ring and work their asses off day in and day out. It shouldn’t matter if they’re black, white, green, pink, purple, platinum (If you are platinum please contact me I want to know what planet you’re from!). At the end of the day they’re all wrestlers, and we’re all fans. That’s good enough for me.

The post The real numbers of Brock Lesnar appeared first on BodySlam.net.