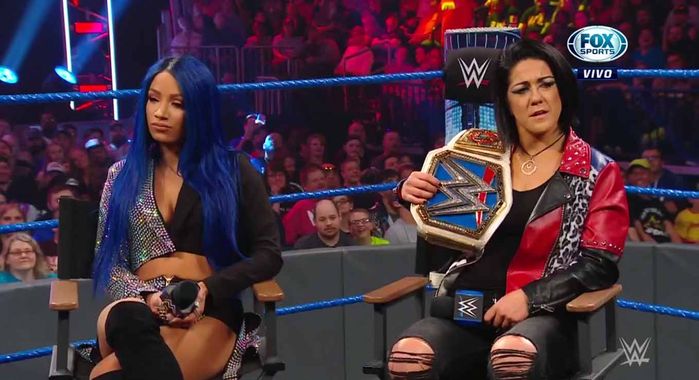 The WWE has been teasing a split in the friendship of Sasha Banks and Bayley for a long time, so much so that at any point there could have been trouble in paradise the fanbase were pretty sure the end was nigh for the duo as a pairing. As the weeks went on however, while some WWE social media pages still tried to keep the pot stirring, things seem to have gone completely in the opposite direction. As I write this article Sasha Banks and Bayley are the RAW and Smackdown Women’s Champions respectively and the WWE Women’s Tag Team Champions. Everything’s coming up roses for the duo known as the Golden Role Models, surely they couldn’t be more happy with their success as a tandem? Well regardless, in the WWE we know that friendship is a fickle thing and today I’m going to take a look into the future of Sasha and Bayley and let you all in on how I think it would play out if the long rumoured breakup were to happen. It’d take a heck of a wedge, wouldn’t you think? The thread begins to unravel at SummerSlam.

So judging by how things are being set up right now at SummerSlam we’re looking at Bayley vs. Naomi and Sasha either taking on Asuka or the winner of whatever the Nia Jax vs. Shayna Baszler deal is. For this scenario we’re going to go with Shayna right now as Asuka is mourning her fall friend and plotting revenge on Sasha and Bayley. At the event Bayley loses her championship to Naomi after a distraction from Asuka, post match Asuka decimates Bayley but Sasha does not risk making the save as she has a match later and does not want to end up injured. She is torn but backs off as security escort Asuka out of the building.

Later in the night Sasha successfully defends her championship against Shayna with help from Nia Jax. Post match Sasha gloats that she’s too smart to risk losing the championship, points to her head and gloats a lot.

The RAW after SummerSlam

Bayley isn’t happy that Sasha wasn’t 100% there for her at SummerSlam but says she understands. Sasha is still champion and they’re still Women’s Tag Champions, they’ve preserved most of the gold. Once everything is said and done her arm will be healed and they’ll show Naomi who’s boss. Bayley says that before they can do that though the Asuka problem has to be solved once and for all. They need payback and that’s why Bayley has asked Stephanie McMahon to give Sasha a match at PayBack against Asuka. No Disqualification. Bayley seems excited but Sasha is not, even though she tries to fake it.

Later in the night Sasha and Nia w/ Bayley def. Shayna and Ruby Riott with help from Bayley. Post match Stephanie McMahon appears on the Tron and congratulates them on their victory but not to celebrate so quickly. Asuka has accepted the No Disqualification match and it will be this Sunday at PayBack…for the RAW Women’s Championship. Sasha throws a fit and Nia walks off as Bayley tries to console her friend.

Okay so I might have missed a few story beats here but with the news that WWE is considering having PayBack the weekend directly after SummerSlam this seemed like the best option, especially when PayBack is the perfect place for Asuka to have her revenge.

Asuka of course takes full advantage of the No DQ ruling and shows up as the Super Evil Clown KANA version of herself. She absolutely massacres Sasha and Bayley. Bayley reveals her arm injury isn’t as bad as people thought and the Golden Role Models try and work this as a handicap match but Asuka is a woman possessed and despite suffering some nasty hits powers through the pair’s double team offence. The finish comes when Asuka has Sasha locked in the Asuka lock and just as Bayley tries to break it up with a chair Naomi comes and spears her to make the save, leaving Sasha alone and tapping out.

The Road to Clash of Champions

The road to Clash of Champions has Bayley and Sasha both completely distraught and straight up ticked off. They attempt to make Naomi and Asuka’s lives on RAW and SmackDown a complete misery and are constantly complaining about rematches. The girls are avoiding competing because they are “traumatized by the unfair treatment at the hands of Asuka and Naomi at PayBack” but you can tell they’re just scared they’ll lose their Women’s Tag Titles too. On RAW they have a #1 Contenders Ladder Match for a contract to face Asuka featuring Liv, Ruby, Shayna, Nia, Natalya and Belair. Sasha sneaks into the match at the end and steals the contract for the match. On the SmackDown side of things Naomi has been a dominant champion and takes on every woman on the brand. They have a Women’s #1 Contender Battle Royal which features Lacey, Nikki Cross, Alexa Bliss, Sonya Deville, Mandy Rose, Dana Brook and a returning La Luchadora. In predictable and comic fashion La Luchadora sneaks around the ring and hides until she dumps out Mandy Rose to pick up the win. Post match she unmasks to reveal herself as Bayley.

On RAW the pair celebrate like giddy schoolgirls and declare themselves the smartest wrestlers to ever grace the WWE. They say they are guaranteed to once again become Bayley Dos Straps and Sasha 2 Belts at Clash of Champions. They say that they can’t believe the WWE Management were so naive to believe that they wouldn’t find a way to keep hold of their Tag Titles and get their rematches because they are just that damn good! They are once again interrupted by Stephanie McMahon who talks about Clash of Champions and how the name really makes it sound like two sets of champions are going to go head to head inside the ring. She says she loves the idea of that and at Clash of Champions she’s going to make it happen. Asuka and Naomi will now have a chance to become Women’s Tag Team Champions as ALL the belts will be on the line in a winner takes all tag team match at the event. Once again the girls lose their composure and break down.

At Clash of Champions, I’m sure as you’ve already predicted, Asuka and Naomi defeat The Golden Role Models to also become Women’s Tag Team Champions. The finish happens when Bayley throws Sasha one of the belts and they try to use their usual shenanigans behind the ref’s back but Asuka ends up catching the belt and nailing Sasha with it before Naomi kicks it out of the ring. Naomi dives to the outside onto Bayley and Asuka picks up the win in a huge moment. Asuka and Naomi celebrate and it really feels like Sasha and Bayley have hit the end of the line.

Post match Sasha sits in the ring upset, her eyes glassy and with tears in them. Bayley kicks the announce table and screams at the commentary team. Bayley gets in the ring and puts her hand on Sasha’s shoulder. The two hug and Bayley gives her hand to help Sasha up…

Banks locks in the Banks Statement!

Bayley starts tapping like a maniac as Sasha screams at the top of her lungs “This is all your fault!” Sasha keeps wrenching Bayley and Bayley looks like she passes out completely cold in the move as EMT’s and security rush the ring. Sasha finally lets go and stares down at her former friend. No remorse. No love. Cold. The sun has set on the Golden Role Models.

There you have it folks, this is what I think it will take to finally cause the split that most of the WWE Universe has been waiting on for a long time now. We’ve been through therapy sessions and heel turns, injuries and huge championship victories but in the end everything has to come to an end and I’d sure love to see it play out like this. If you agree or have your own ideas let me know over on Twitter @ChatChatterson and share this article with your friends. Thank you all once again for spending this time with me here on BodySlam.net, we love each and every one of ya’ll.

The post Splitsville for The Golden Rolemodels? appeared first on BodySlam.net.