Even though Paige is recovering from surgery, that doesn’t mean she is out of the public eye. With social media being a constant force in people’s lives, it’s hard for celebrities to leave the limelight, unless they choose to. Earlier in the week Paige’s boyfriend Ronnie Radke was the center of controversy after Paige posted a video of Ronnie acting like a ‘cholo’.

Paige attempted to defend Ronnie’s actions in the video that Paige recorded and can be heard laughing in, by tweeting this

I love getting texts from @Zelina_VegaWWE we are talking about YOU twitter and how you can’t take a damn joke ???
— PAIGE (@RealPaigeWWE) October 7, 2019

HaHa I love having trolls on strings. They dance so well! Now watch what else we do ? let’s keep em talkin ? https://t.co/8WEachWryT
— Thea Trinidad Budgen (@Zelina_VegaWWE) October 7, 2019

This is quite surprising as Zelina lost her father in the September 11th attacks. The same attacks that Ronnie Radke used as the basis for a joke he posted on memorial day years ago. 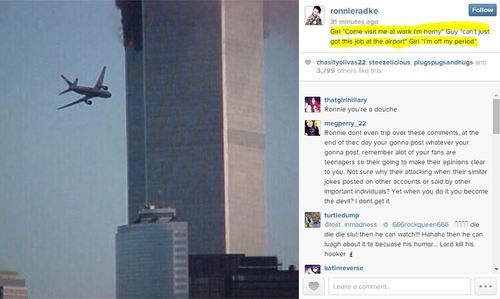 On October 7th, Paige said she was leaving Twitter after so much backlash, but returned to the platform on October 8th.