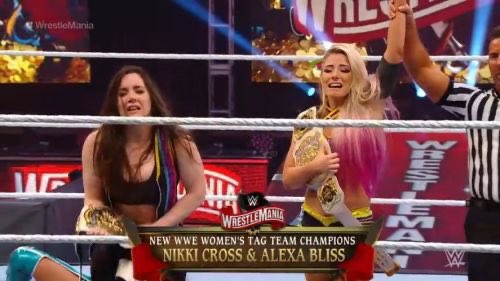 WrestleMania 36 Night 1 is currently underway. The night kicked off with the Women’s Tag Team Title match which saw the champions The Kabuki Warriors taking on the team of Alexa Bliss and Nikki Cross.

With the first match of night (not including Cesaro vs. Gulak on the kickoff show) also saw the first title change of the two night event. Alexa Bliss and Nikki Cross defeated The Kabuki Warriors after Bliss connected with twisted bliss on Kairi Sane scoring the pinfall victory.

You can see WWE’s tweets highlighting the new Women’s Tag Champs below.