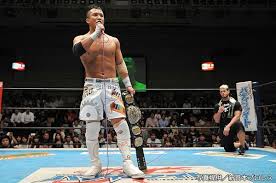 Yujiro Kushida announced recently that he will be leaving NJPW at the end of January. What he will do now in his career is uncertain. However, there have been reports that he will be signing with WWE. If he does indeed sign with WWE, it most likely will not be to the main roster.

Even though no official announcement has been made, that does not usually happen until everything is confirmed. WWE does not like to give away big signings beforehand so that they can get a much bigger pop from a TakeOver crowd when a new Superstar is seen sitting in the front row.

However, on the latest audio update of PW Insider Elite Mike Johnson said that he has heard nothing about Kushida going to NXT.

“Kushida is 35-years-old, he’s a hell of a hand […] he has said that he accomplished everything that he can accomplish in New Japan and he wants to go travel the world and wrestle. You know, to me if you want to grow beyond New Japan and do something WWE is the most likely potential home for you.”

Johnson said that Kushida’s Back To The Future gimmick is a hit in New Japan, but it will probably be changed by WWE if he signs with them.

He noted WWE has a relationship with Universal, but they most likely will not go with the McFly gimmick. So we will have to wait and see if Kushida does sign with WWE or not.

h/t to Ringside News for the transcription.
Article source: http://www.bodyslam.net