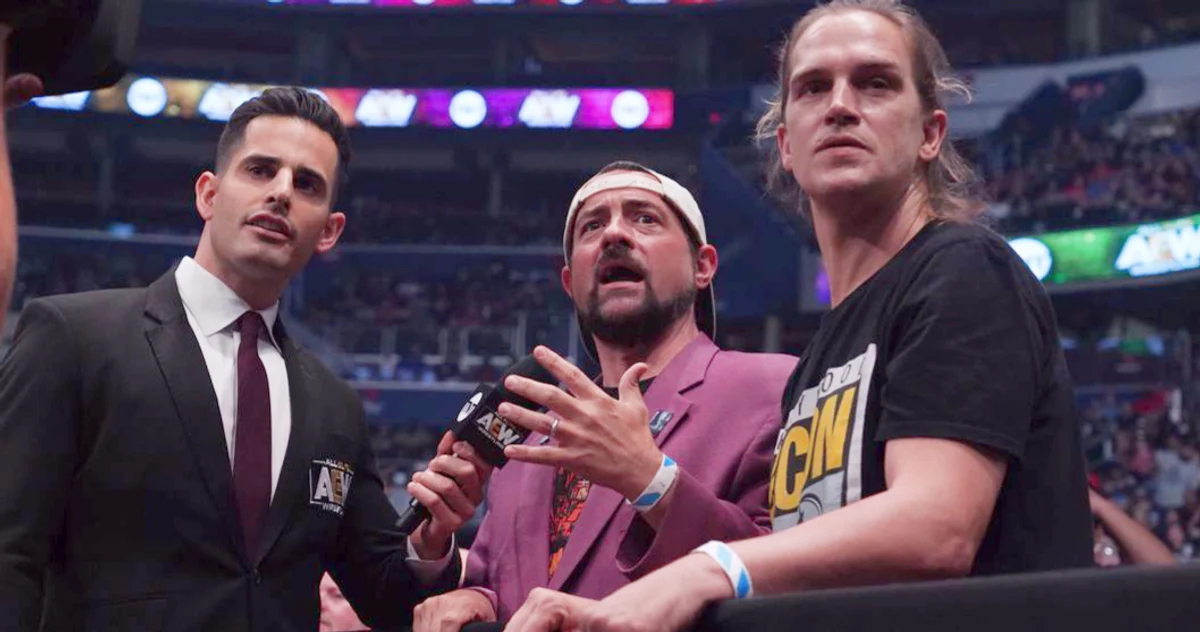 AEW’s debut episode of Dynamite on TNT took place in Washington DC, and featured a lot of memorable moments. One of which was a segment involving Kevin Smith and Jason Mewes, or as many know them – Jay and Silent Bob.

Smith and Mewes were in attendance to help promote their upcoming movie Jay And Silent Bob Reboot, which also featured a cameo by AEW Star Chris Jericho. Smith and Mewes were sitting front row for the show and were being interviewed by Chris Van Vliet until TH2 – Jack Evans, and Angelico came out and interrupted things. This lead to Private Party coming out to the aid of Jay and Silent Bob, as they were in a program with The Hybrid 2 at the time.

Kevin Smith recently spoke with Wrestling Inc, and he talked about their appearance on AEW Dynamite. Smith revealed that he was warned by his publicist that if he did AEW’s Dynamite appearance that WWE might not allow him to appear on their broadcast.

“Chris was like, ‘Hey man, we’re doing an opening match for AEW. I’m in the flick. Will you guys come?’ I thought absolutely as it was in Washington DC and we were in New York that day so we just hopped a train. But when we said ‘yes,’ WWE was also asking if we wanted to go promote Jay and Silent Bob reboot there [on SmackDown’s FOX debut].”

“The publicist said if you’re gonna do a wrestling show, do WWE. But Chris is our boy and I’ve got no real ties to WWE while I have a direct tie to AEW. Then the publicist said if you choose AEW then WWE is probably gonna take their offer back. I was like, ‘I get it. So be it.’ We said we’re doing AEW and then the word came back, ‘WWE is fine with that. You can do them as well.’ So, I was like we’re doing both.”

“The next morning we were told that WWE was like, ‘you can’t come on anymore.’ And they canceled us.”

“Can you believe it?! It felt really weird, man. There’s a line drawn in the sand and they pushed us onto the one side of it.”

You can see Kevin Smith talking about his appearance on AEW Dynamite below.