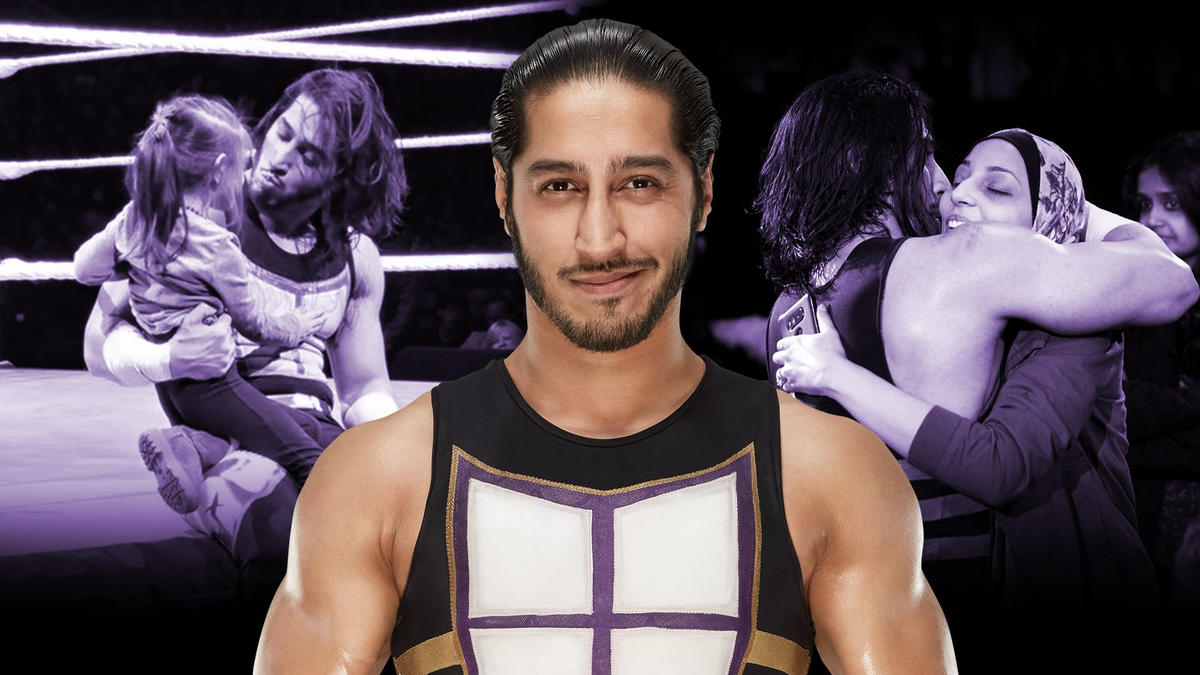 “My name is Mustafa Ali, I’m a Muslim-American, and I’m competing at WrestleMania for the Cruiserweight Championship.”

That sentence serves almost as a mission statement for Mustafa Ali as he heads into WrestleMania 34 to take on Cedric Alexander in the final of the WWE Cruiserweight Championship Tournament. For the Chicago native, the battle against his close friend is about much more than a championship. If the pressure of competing on The Grandest Stage of Them All for a title after 16 years of grueling work to get there wasn’t enough, Ali is thinking bigger and adding even more weight to his shoulders by fighting for progression both inside and outside the ring.

“To me, it’s a huge opportunity for representation,” Ali told WWE.com. “There are preconceived ideas and these barriers that have come along with a name like mine. [I’d be] typically portrayed as the ‘bad guy.’ I have a chance to knock all that down and show young guys and girls who look like me and have a name like mine, here’s a guy like you that chased his dreams and wasn’t worried about labels.”

It’s a lot of weight to carry for one Superstar, but Ali is determined to make the most of his opportunity because, in the back of his mind, he knows that it almost didn’t happen.

Mustafa Ali had been contacted by WWE about the Cruiserweight Classic and was under the impression that he would be part of the field competing in the 10-week event. On June 13, 2016, the list of 32 competitors was released, but his name was nowhere to be found.

“I didn’t know what happened, if I had done something, or they had forgotten about me,” Ali said. “I frantically contacted William Regal to find out what happened. It was then I found out I was an alternate. I remember being so devastated.”

They left my name off the “list.” Heading to Orlando so I can show them that was a bad decision. #ProveThemWrong pic.twitter.com/X3vVsvjDEQ

Ali would head to Orlando for the Cruiserweight Classic Combine, hoping to make an impression. When a competitor was forced to withdraw from the tournament, a slot in the first round competing against Lince Dorado became available, and a door was opened for Ali.

With that in mind, Ali went to the ring and dazzled the WWE Universe with his awe-inspiring offense, including a springboard Spanish Fly and the inverted 450 splash that has become known as the 054. Though Dorado advanced at the end of a hard-hitting, high-flying duel, Ali knew he had accomplished his goal.

“My mindset was to maximize every single second that I had,” Ali said. “I knew that I didn’t have nearly as much of the fanbase or reputation as some of the other guys in the Classic, but I told myself ‘You have to go out there and capture their attention right off the bat.’ I felt like, after my performance, they were like ‘keep an eye on this kid.’”

Ali was invited back to compete in non-tournament action through the remainder of the CWC and later in NXT’s Dusty Rhodes Tag Team Classic. But in late 2016, Ali was signed by WWE prior to the launch of 205 Live, a show exclusively featuring the Cruiserweight division. His signing came at the right time, as he was in the process of making a heavy career decision.

“The funny thing is, when the CWC happened, I was actually considering stopping my independent career at the end of 2016 and focusing full-time on my law enforcement career,” Ali said.

Ali was a police officer in Homewood, Ill., just outside of Chicago, serving four years on the force before realizing that balancing those two careers, as well as a home life, was incredibly challenging.

“It’s very hard to be a family man, a father, a husband, an independent wrestler and a police officer. But at the end of 2016, I signed with WWE. I’m very lucky that it all fell into place when it did. I won’t tell you that I’m lucky to be here because I know I’m skilled, and I know I’m talented in the ring. That doesn’t mean that I don’t appreciate the opportunity.”

Though Ali stood out from the pack initially because of his offense, he’s come into his own since the arrival of new 205 Live General Manager Drake Maverick and the start of the WWE Cruiserweight Championship Tournament. The high-flyer has begun to find his voice as a Superstar and help the WWE Universe answer a simple question: Who is Mustafa Ali?

I have a chance to step up instead of taking a step back.

I have a chance to make things right.

“On my own time, I hooked up with a buddy of mine who has a really nice camera and shot these videos that I thought were different and showcased my potential — who I am, what I represent, who I’m fighting for,” Ali said. “Because at the end of the day, if they don’t know who I am, I’m just a guy doing some spectacular moves. If they know what I’m fighting for, who Mustafa Ali is, that’s the gamechanger.”

Pursuit of the WWE Cruiserweight Championship has indeed been a gamechanger for Ali, who has gone through three grueling battles, surviving a match with the ruthless Gentleman Jack Gallagher, outsmarting the speedy and strong Buddy Murphy and winning an all-out brawl with Drew Gulak to cement his position on The Show of Shows. As 205 Live continues into a new era, Ali is determined to show that he should be the centerpiece of the brand.

“I want to be the guy at the forefront,” Ali said. “I want to put the division on my back. I feel like I’m a guy you can give the ball to, and I’ll run with it. I knew I had to prove myself because a lot of guys in the division are more established than I am. I knew I had to earn everybody’s respect. With that came a new sense of purpose. I’m going to make this division something special.”

He’ll have the opportunity to do just that in New Orleans. The tournament final with Alexander at WrestleMania is one that 205 Live fans have been clamoring for since the start of the tournament. The two close friends have similar styles inside the ring, but Ali thinks that is where the comparisons end.

“The biggest difference between Cedric and I isn’t our style, isn’t our background; it’s simply our mindset,” Ali explained. “Cedric believes he deserves to be at WrestleMania. He believes he deserves to be the Cruiserweight Champion. Cedric has the mindset that this already should have happened for him. I’m different. I’m the underdog, Cinderella story. I realize I’ve gotten here by a thread. I’m fighting for so much more than a championship, victories and celebrity status. I’m fighting for a purpose, fighting for those who can’t. I’m fighting for the right for others to dream without any limitation, without any worries. Cedric and I are worlds apart. We are very close friends, we have very similar styles in the ring, but Cedric is one man, while I’m fighting for millions.”

While Ali’s battle for representation may be one on a global scale, it hits home for him on a very personal level as a Muslim-American.

“I have a 4-year-old daughter and a 9-month-old son, and my wife wears a hijab,” Ali said. “In a weird way, I’m not just fighting for them to feed them and clothe them. I’m fighting for their safety and acceptance. I constantly worry about them.”

He continued, “I’ve been to lunch and dinner with my wife, where I’ll see people staring. She won’t notice it, but I will. People will stare at her because she wears a headscarf. Being her husband, I worry for her. That’s what my mission is. I want people to hear the name Mustafa Ali and want them to know that I’m a proud American. I’m from here, I’m from Chicago, I’m just like one of you.”

That mission started, in a way, on 205 Live following Ali’s victory over Drew Gulak.

“My wife was in the crowd that Tuesday in Dallas when I defeated Drew Gulak to head to WrestleMania,” Ali recalled. “I jumped the barricade and hugged her, and I just realized that there was a hijabi woman on WWE programming. This is awesome. This is representation. I want people to know she’s a wife and mother too. By my success, I want people to go ‘they’re just like us.’ We truly are all just one.”

So, when Mustafa Ali enters the Mercedes-Benz Superdome at WrestleMania, in front of 75,000-plus members of the WWE Universe from around the world, what will he be thinking?

“My mind will be going a million miles a minute,” he says with a grin. “I’ll be thinking about the performance, I’m going to be thinking about my dad, who’s no longer with us, and how much he loved WrestleMania. I would sit in his lap and watch it with him.