Back in September a wrestling company named RCA Wrestling was claiming to sign wrestlers to exclusive contracts and would compete with AEW. Some wrestlers were hip to the joke and joined in on the “fun”. After most found out the company was a scam, many people stopped talking about it.

Recently RCW Wrestling popped up this month and began the same routine. Signing people through DM’s for “3000$ or more” it seems the trick worked on many people once again, while some saw the “company” for what it was. A joke.

I DM’d the company asking to be signed as well. Wouldn’t you know, I was able to “get signed”.

Just like that I was executive producer. I told Bodyslam that I must put in my notice because big things were happening. Luckily Bodyslam knew I wasn’t serious.

Then a few days later, a group chat with over 30 people started and everyone that was “signed” to what was then RCW was in the chat. Within hours some people were fired and we found out the “owner” of this company was Brock Lesnar’s son, 17 year old Luke Lesnar. There had already been scuttlebutt of a fake Luke Lesnar Instagram account, now there was a Twitter account to boot.

To sum up the first few days of what was happening, Ethan Smith wrote a “tell all tweet” about everything discussed.

Soon after, another group chat started, some people were promoted. I was now “coordinator” of what I don’t know. But wrestlers and podcasts were leaving the group chat, while some wrestlers even DM’d me asking if this company was legit. Sadly it was not.

As you can see. Many in the group were playing along, but this fake Luke Lesnar seemed to be getting upset that people weren’t taking him seriously. Independent wrestler Dan Barry decided to pull a power move and maneuver himself to the top of the company.

This is the point where Luke Lesnar and RWC left the group chat. But I was sending tweets on updates of the company.

Breaking news: @thedanbarry just got Luke Lesnar to quit his own company. More to follow soon

After these tweets were sent out. The Real Luke Lesnar made it public that he is not running a company and that the person behind the other account is not him. This imposter also has posed as Shawn Micheals son and is behind the Pat Patterson Twitter account. 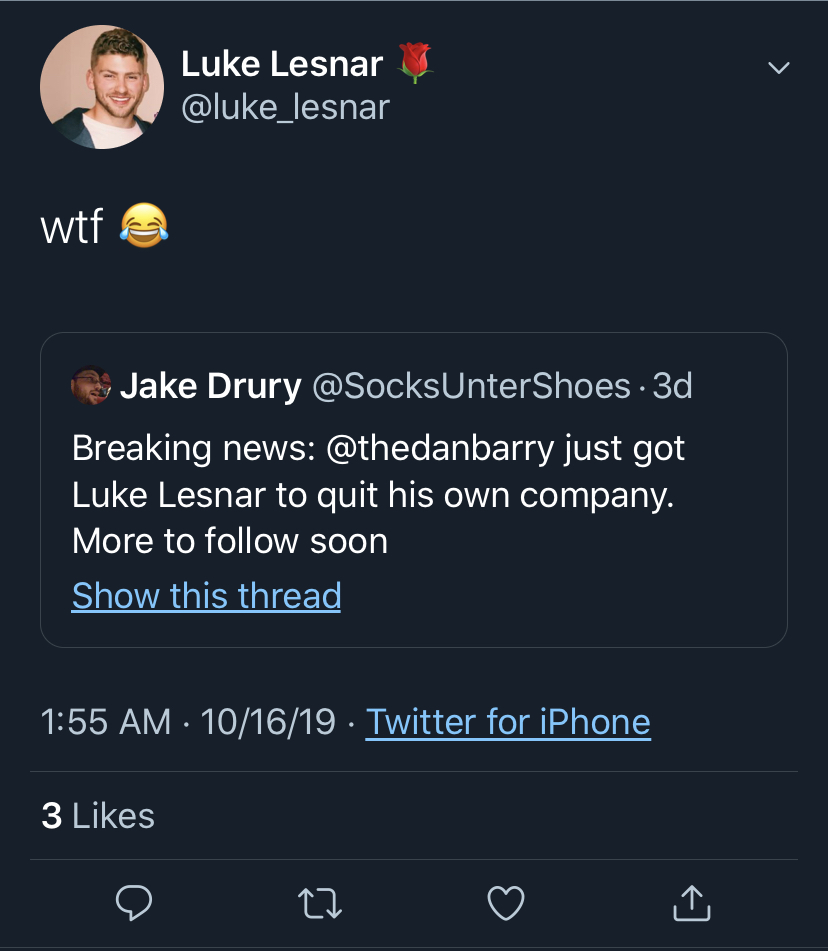 Luke also states that he is not on Instagram at all. One of the fake Lesnar accounts has since been suspended, but the “wrestling” companies twitter account is still up as of this writing.