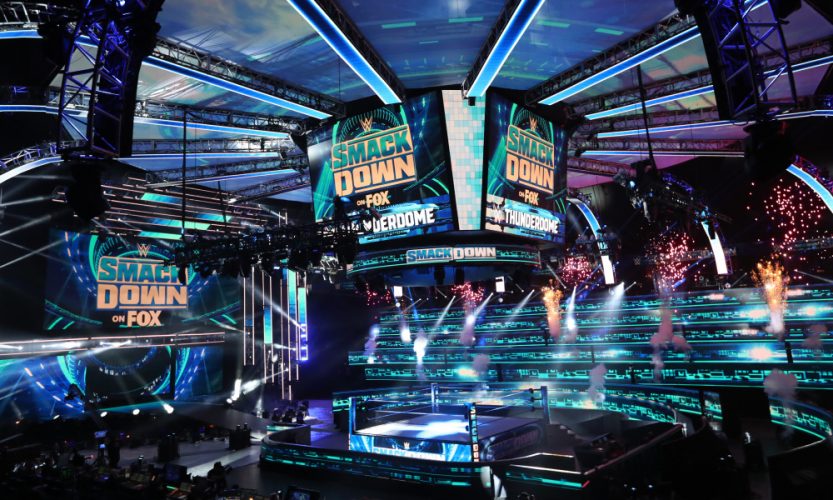 Everyone’s favorite WWE weekly show, just got a little more awesome. There were some losses for the “blue brand” like “The Fiend” Bray Wyatt, Alexa Bliss, The New Day, Jeff Hardy, AJ Styles and others. But the gains are going to be the best they’ve been in years, in my opinion. Superstars like Seth Rollins, Aleister Black, Bianca Belair, Rey Mysterio, Kevin Owens and Zelina Vega will now call “Friday Night Smackdown” their home.

This article is going to be a little different than my Monday Night Raw article, as there are so many things I want to touch on due to the new influx of talent that Friday Night Smackdown now has. So without further delay, we shall begin!

Roman Reigns vs. Seth Rollins: Don’t groan and cry, this feud will never get old. Seth Rollins, who has been a part of a blood feud, with what seems like the whole Mysterio family, needs a change of pace. More than likely, this feud won’t happen right away, but given all of their history as a part of The Shield and as competitors for various incarnations of a world title this is a story that writes itself. The Big Dog is dead. The Tribal Chief is here and this is, hands down, the best thing Smackdown has going for it. Paul Heyman as the mouthpiece to a Roman Reigns that doesn’t need a mouth piece is just the rich getting richer. It’s been said ad nauseum, “The best WWE Superstars are a version of themselves with the volume turned way up.” I totally believe that this is who Roman Reigns is. Not necessarily a bad guy or a terrible human being, but just a confident professional who believes he is the better man, no matter who he’s in the ring against.

Roman Reigns vs. Big E: This is a dark horse for a great feud. Big E needs to be built as a genuine star and in order to do that, he needs quality wins and programs with quality opponents. All of the log  rolling down the ramp during his entrance, the hip gyrating, the pancakes, all of it MUST end when you’re going against the World Champion. Don’t get me wrong, I’m entertained by it! I think it’s great television, but Big E needs to get back to that character that demanded a 5 count in NXT that made him an NXT Champion. Or perhaps find the gear that he switched into to get a win over Sheamus on Friday Night Smackdown, which was one of the most brutal street fights that I’ve ever witnessed on WWE TV. The potential that Big E has, is there. No questions about it. If it wasn’t there, “He Who Shall Not Be Named”, wouldn’t have split up one of his most successful teams, from an in-ring and marketing perspective. Can you imagine how much money The New Day makes WWE? Seriously. It’s gross. Big E vs Roman reigns won’t headline Wrestlemania, let’s be honest about it. But I think it could be potentially a feud to remember.

Roman Reigns vs. The Rock: I know, I know. “Dwayne Johnson makes movies; he’s not ‘The Rock’ anymore.” Dwayne Johnson will always be “The Rock”. It needs to be talked about and I couldn’t resist, because I am a huge Rock fan. The “Tribal Chief” vs the grandson of “The High Chief” Peter Maivia. Roman Reigns has stated that he is the “head of the table.” That as far as the Anoa’i family is concerned, he’s the “top dog”. With all due respect to Roman Reigns, but excuse me? Didn’t we all see Roman Reigns in Dwayne Johnson’s movie? Wasn’t Rocky Maivia a huge star before Roman Reigns? This is a match that can ONLY happen at Wrestlemania. The buildup to this match would be Must See Television. Paul Heyman has history, not only with The Rock in his feuds with Brock Lesnar and C.M. Punk, but he’s linked to members of the Anoa’i family. If this isn’t a Wrestlemania match, either in Tampa or in L.A., then WWE is missing a golden opportunity.

Daniel Bryan vs. Aleister Black: Just from a wrestling standpoint, this could be epic. Both men, have been lauded for their wrestling. But from a storytelling perspective, they’ve grown leaps and bounds. Daniel Bryan is still heavily considered to be one of the very best technical wrestlers in pro wrestling today and has been for years. Mix in the striking ability that he’s exhibited since his “American Dragon” days and you’ve got one dangerous competitor. Aleister Black has undergone a transformation, since his feud with Seth Rollins, where the latter tried to force out Black’s eye using the steel ring steps. Black, then on his return, tried to take out his frustrations on Kevin Owens. As misguided as that was, Aleister Black is just as intimidating and dangerous as Bryan. This could be really good.

Daniel Bryan vs. Rey Mysterio: Two living legends. I don’t care who you are. Rey Mysterio vs Daniel Bryan is a money match. It may not close a Wrestlemania, but it could open one with a Hair vs. Mask match or Hair vs Career, or Mask vs Career. Both men have given everything they have to WWE and both men have been considered “superheroes” to the legions of fans that they’ve made. Both men have been considered undersized and both men changed the mind of the man in charge with his belief that “bigger is better.”

Bianca Belair vs. Sasha Banks: Sasha Banks is currently locked in a feud with former best friend, Bayley. However, this is too good to pass up. Sasha Banks is quite possibly, one of the strongest heels in wrestling. When Sasha Banks has a title over her shoulder and she’s confident, no one can see her in the ring or on the mic. I’ll never forget during her feud with Bayley, when both were in NXT and they had a contract signing for their epic 5 star match in Brooklyn, Banks pulls out a stamp that said “LEGIT BOSS”! How cool is that? Bianca Belair, who has been a rising star on NXT, but hasn’t really duplicated that success on the Main Roster due to start and stop booking, matches up well with Banks. “The EST of NXT” is going to need to step it up and get some quality wins over some of the ladies of Smackdown to be in the topic of conversation for the Smackdown Women’s Championship, but I believe that a feud between these two women could be very entertaining.

Bianca Belair vs. Bayley: Speaking of the Smackdown Women’s Championship, how can you talk about the title without talking about the longest reigning Smackdown Women’s Champion of all time, Bayley, who is currently at the time of this article is at 370 days and counting. Belair, who is low-key, one of the most athletic WWE Superstars on any brand, is an even matchup with Bayley, physically. But Bayley as a total package, has been unrivaled in 2020. Color me impressed, I didn’t think she had this type of range as a performer. Bayley has been thought provoking, funny and intimidating all in the same promo. When a performer elicits an emotion from the audience, they’re doing something right and Bayley has had me in my feels all year. These two women can certainly tear the house down if given enough time to tell a story.

Please, if you’d like, send me some of your ideas for Dream Matches and Future Bookings. These were just some of my favorites, but I’d love to hear some of yours! You can comment below, or follow/reach out to me on Twitter, @HisNameIsDario. Thanks for reading!