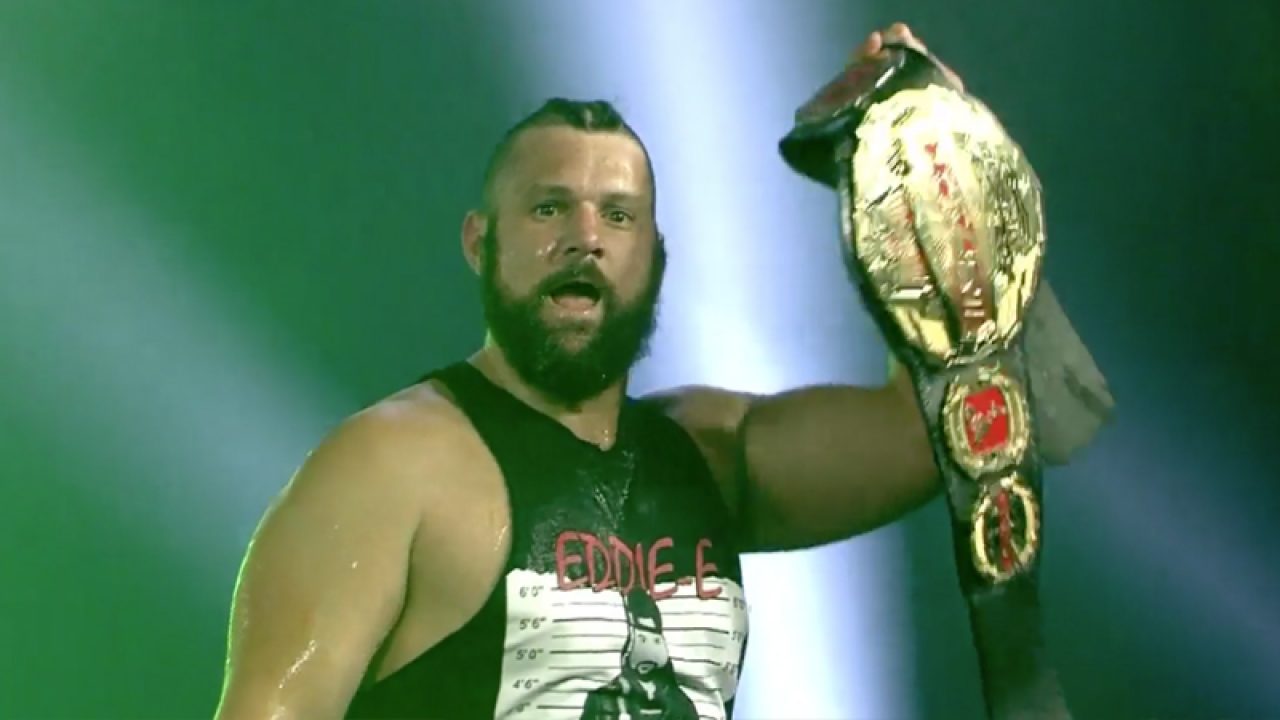 Right now IMPACT World Champion Eddie Edwards is on a mission to prove he is a fighting champion, that he represents the IMPACT brand with respect and dignity and that he has no problem taking on all comers. Since winning the title at Slammiversary he has come face to face with Trey Miguel in what was a highly competitive match where both men left it all in the ring and exchanged words with Eric Young, who seems to want to wait until the time is right to challenge, otherwise however the field right now seems pretty empty. We all remember when Cody Rhodes left the WWE he had a list of talent that he wanted to face, well when he won the AEW TNT Championship and declared he was going to have open challenges for the title I took the time to write Cody a new upgraded list of potential challengers I’d like to see. Now with Eddie’s similar attitude towards his world title run I think it’s only fair that I do the same for him. Some of the additions to this list will of course be one offs and others could lead to bigger feuds but all of them are what I feel would bring out the best in the reign of Eddie Edwards. Remember, Anything Is Possible.

With his tag partner TJP refocusing on the X Division there’s a chance that Fallah Bahh may start getting the itch for some singles gold of his own. Bahh has proven time and again that he’s more than capable of performing when it comes to high profile matches and that he can very easily get the crowd behind him. While he hasn’t found championship success in IMPACT Wrestling to this point I think he could prove a very fun challenger for Eddie Edwards and the two could make some magic together. Bahh is very athletic for his size and can also utilize the power game and given the time I think we’d have another great match on our hands.

We all love a good Ghost from the Past angle and Eddie Edwards has one ready and built in with former Wolves tag team partner Davey Richards. Of course as of now Richards seems to be done with the business but Pro Wrestling is a game of never say never and I think we all know the quality of this match inside the ring would be world class. The two have already feuded and in Richards’ last high profile match with IMPACT it was Eddie and Alisha that got the win over Richards and his wife Angelina Love in Full Metal Mayhem. Now Eddie is back on top, the heat is certainly there for Richards to come back and take a shot at revenge and the IMPACT World Title. Is it likely? Perhaps not but even as a one shot for an episode of IMPACT I think this one would be a barn burner.

Coming off the back of a hot X Division Championship run that silenced the most ardent of deniers, the wrestling world is asking what’s next for Willie Mack? Personally I believe in the saying onwards and upwards and what better way to signal his continued rise than stepping up and stepping into the ring with IMPACT World Champion Eddie Edwards? I can’t think of many. Mack has proven time and again that he has the intensity and sheer God given talent to do whatever he sets his mind to in Wrestling and after two matches with Chris Bey, where they pushed each other to the limit, there’s no doubt in my mind that he could do exactly the same thing with Eddie Edwards. Edwards vs. Mack would certainly be one of those hard hitting affairs that gets the wrestling world talking and even if defeat could provide the rise to the main event for Chocolate Thunder that many would love to see.

Come on now, who doesn’t love The Swingman! While I don’t think he has a snowball’s chance in hell of actually picking up the championship from Edwards merely him believing he could would be pure entertainment. Drawing ire from Edwards by talking about how it’s an embarrassment to have such a mizzark as Champion and how Eddie draws less dizzimes that Double J could lead to a world class asswhipping like no other. This would be a perfect match to show just how dominant Edwards is and him making an example out of a rude and disrespectful Johnny Swinger would be a great way to do it. Especially if we throw Alicia into the mix, we all know what happens when someone messes with Eddie Edwards’ wife.

Kenoh is a former GHC Junior Heavyweight Tag Team Champion, GHC Tag Team Champion, winner of the 2017 and 2019 Global League/N-1 and the man who defeated Eddie Edwards to dethrone him as the GHC Heavyweight Champion. One of the centrepieces of Pro Wrestling NOAH he excels between the ropes and if his previous bout with Edwards is anything to go by a repeat on American soil would be something special for IMPACT fans. Of course there’s a couple of factors that could get in the way of this one, the global pandemic and if the two companies could come to some sort of agreement to let Kenoh come and work for IMPACT, regardless this match would definitely be a show-piece of Edward’s run. Time will tell if this one goes down but if so it would be a massive triumph for Edwards to finally pick up the win against the man who previously had his number and perhaps feels confident that he could do it again.

Okay, we’re going a bit out of left field here but hear me out. What better way to raise the profile of both AEW and IMPACT than a little bit of cross promotion between the two companies? Right now both promotions have champions who are willing to take on all comers and what a way to dominate a week and draw the attention of a fanbase than having Cody challenging Eddie on Tuesday and Eddie challenging Cody on Wednesday. Of course neither match would have to end clean or have the titles change hands, with Eric Young disrupting IMPACT’s proceedings and the Dark Order continuing to cause trouble for Cody on Wednesday nights. Just the fact that both men get some time to work against each other and show that they are everything that they say they are would be enough. If it really is “all opponents welcome” why not make some waves in the wrestling world and actually prove it? Come on lads, put your money where your mouths are!

Thank you all for joining me here on BodySlam.net and taking a look at my list. Of course these are all personal choices and I didn’t include EY because I think that’s a no brainer down the line. If you like these ideas let me know over on Twitter @ChatChatterson and of course give the article a share, maybe we can help make some of these would be epics happen!